Finland, a country within the Arctic circle, strewn with thousands of lakes, sauna, reindeers, great outdoors and introverted locals. A Nordic nation that treasures silence, but has nevertheless succeeded in building a coherent visual narrative, where everyday design objects speak louder than words and communicate the values of Finnish society. When it comes to furniture design, Finland has often been overshadowed by its Scandinavian neighbours, Sweden and Denmark, yet its contribution to global design and the role of women in creating it, deserve its own place in the spotlight. Let’s have a look at the brief history of Finnish design classics as well as some new, exciting brands to discover.

From Functionalism to the Space Age

In 2017 I had a chance to see a special exhibition ‘Echoes: 100 years in Finnish design and architecture’, while it was on view in various countries of Central Europe. The exhibition, which marked the centenary of Finnish independence, narrated the history of the 20th and 21st century Finland through design rather than historical events and, needless to say, I really liked the idea.

It featured Modernist pieces by Alvar Aalto, Finnish architect and designer, like the iconic glass vase he created for Iittala or a stool 60 for Artek that you can now spot in Apple stores worldwide.

It’s remarkable how a small country, far away from the European centres of culture and with limited resources, has managed to come up with a strong design aesthetic based on rationalism and solutions for smaller apartments available to all social classes. That didn’t mean that Finns shied away from experimentation. In 1968 Eero Aarnio created the futuristic Bubble chair made of plastic fibre that later appeared in Stanley Kubrick’s ‘2001: A Space Odyssey’.

The Finnish design wouldn’t be the same without the contribution of women. Just take an example of Marimekko, an iconic Finnish design company famous for its bold and joyous prints. The brand, founded by a woman, Armi Ratia, opened its first store in Helsinki in 1952 and soon gained global recognition for its original take on textiles and fashion.

Marimekko loose-fitting dresses were worn by Jackie Kennedy in the 1960s and displayed at the Rinascente department store in Milan, where they caught the eye of young Giorgio Armani. Throughout the years the company has worked with many talented designers from Finland and Japan, yet the credit for the most popular Marimekko print goes to Maija Isola, who in 1964 created Unikko (poppy), against the will of her boss who didn’t approve of floral patterns.

Some say that Marimekko bright textiles respond to the contrasts of Finnish seasons with dark winters and long summer days. One thing for sure, the brand, alongside Svenskt Tenn in Sweden, represents the more #colourpop side of Nordic design meant to express open-mindedness and creativity in everyday life.

If you’re looking for a modern interpretation of ‘silent’ Finnish design then Showroom Finland is definitely a name worth checking out. They offer plywood Pilke lamps designed by Tuukka Halonen and small minimalist objects for home such as bowls, shelves and racks. The lamps are made of eco-friendly birch wood, a nod to Finnish forests that occupy more than half of the country. The pared-down aesthetic of Showroom Finland successfully communicates main qualities associated with Finnish style – craftsmanship and functionality that originate from a dialogue between forms and materials.

A contemporary design studio led by architect Timo Ripatti is already established on the international design scene, winning awards and being involved in large-scale collaborations. The Grand Canyon modular sofa system for a Finnish company Piiroinen is made of 16 units that bring the idea of well-being and adaptability into common spaces such as offices, lobbies and meeting areas.

The Finnish minimalism has sometimes been described as cold and sterile, but young designers such as Hanna Anonen prove that it can be joyous and colourful as well. As the name suggest, Coctail, her wooden ceiling lamp, is inspired by layers of fizzy drinks. Eye-catching and radiant, it’s a design object made to brighten up grey days.

The Helsinki-based design studio was set up by Anni Pitkäjärvi and Hanna-Kaarina Heikkilä in 2016. What distinguishes their elegant designs are characteristic curvy lines that soften minimalist forms. They’ve also collaborated with a Danish furniture brand Ferm Living by creating a coat rack and wall table.

Due to shortage of natural light during autumn and winter months, lighting plays a particularly important role in Finnish design. Secto Design addresses this issue with their collection of lamps hand-made of birch wood. Their light construction fits into modern interiors and creates the feeling of luminosity.

Hope that you enjoyed my recap of design brands from Finland. Certainly, there is much more to discover during the Helsinki Design Week in September. One day I would like to go and see it for myself. 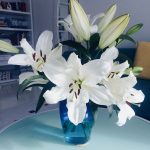 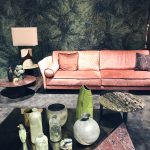