What makes furniture pieces truly timeless? There’s no straightforward answer, but it’s definitely more than just aesthetic perfection that goes beyond fleeting trends. As you will see, creators of these iconic objects focused on the bigger picture. It involved addressing social and technological issues or borrowing from the language of art. Read on to find out more about 12 unique pieces that stand the test of time, listed in chronological order.

Few other pieces of furniture chronicle the evolution of design like chairs. Back in 1876, the Vienna-based Thonet family pioneered industrial production of furniture by introducing bentwood chairs made of modular components. Since then,  Thonet chair no. 18, also known as the Vienna cafe chair, has become one of the most versatile and timeless furniture pieces. Today it’s available in many finishes and seats.

One of the most iconic pieces of Modernist furniture was a fruit of collaboration between three great minds of that period – Charlotte Perriand, Le Corbusier and Pierre Jeanneret.  Together they come up with a zigzag form made of steel, leather and aluminium, which back then, in 1928, was a revolutionary solution. The LC4 Chaise Lounge stands for Modernist functionality that continues to be relevant to this day.

Many say that design responds to the language of art. This rings true in relation to La Chaise armchair designed by Ray and Charles Eames in 1948. Its voluminous form was inspired by a sculpture, ‘Floating fugure’ (1927), by a French-American sculptor Gaston Lachaise. The art connection translated into sales and popularity that granted La Chaise a special place among Vitra’s most timeless designs.

Inspired by the shape of traditional paper lanterns, Isamu Noguchi named his lamps after a Japanese word akari, which means light as illumination. To achieve the effect of lightweightness, he glued paper made of mulberry tree’s bark to the bamboo ribbing. 70 years after its conception Akari’s sculptural form is still ‘poetic and ephemeral’, in Noguchi’s words, and highly compatible with Japandi and Wabi-sabi interior styles that are currently popular.

This iconic V-shaped chair, made of cane and teak, has unexpected links to architecture and geography. Its designer, Swiss architect Pierre Jeanneret, named it after a city in India planned by his cousin Le Corbusier.  Not many of the original 1950s chairs survived to this day, but the good news is that in 2019 Italian brand Cassina issued a 055 Capitol Complex chair, a tribute to the original Chandigarh.

The famous Tulip chair is a living proof that designers often borrow the most unpretentious and archetypal shapes from the world of nature. In this case, from the silhouette of the eponymous flower. Yet, its timeless appeal doesn’t come solely from its organic shape, but also from its revolutionary single pedestal leg. Hard to guess that this iconic piece of design dates back to 1956, when Eero Saarinen conceived it as a part of collection. Today it’s still a perfect fit for both minimal and eclectic interiors.

Can a piece seemingly so mundane and practical like a storage unit become a glamorous design icon? Componibili, a plastic modular storage system, designed by Kartell’s co-founder Anna Castelli Ferrieri in 1967, proved that it’s possible. Today it’s available also in metal and in many colour versions and continues to lead a happy double life as a storage unit and a side table.

My list of the timeless furniture pieces wouldn’t be complete without the Panton chair, which takes its name from its creator, Danish designer Verner Panton. Its bold, sensual form channels the free spirit of the late 1960s, which inspired the visionary idea of the first ever chair made from a single piece of plastic. However, Panton heard as many as 15 rejections, before his concept was approved and manufactured by Vitra in 1967. Hard to believe given the cult status the Panton chair enjoys today!

Another design classic from the 1960s, the Up5 armchair, links the world of interior design to social and political causes. Its curvy form reminds us of the figurines of the ancient fertility goddesses, yet its message refers to contemporary women and their struggle for equality. Gaetano Pesce, a renowned Italian architect who designed the Up5 armchair, intended it as a feminist statement. The little ball-like ottoman attached to a chain symbolises women’s oppression within patriarchal society.

When Ettore Sottsass created this statement mirror in 1970 he proved that design could be about concept and psychological needs as much as it was about function and problem-solving. In that sense, Ultrafragola announced the postmodern, at times theatrical, style of the Memphis group, which made headlines in the 1980s. The sinuous frame of the mirror was inspired by long wavy hair, while its sensual form is thought to be a tribute to femininity.

Some designs achieve cult status decades after they were made, like the Pumpkin sofa, a classic of postmodern design created for private apartments of the French president Georges Pompidou in 1971. Its designer, Pierre Paulin drew inspiration for its soft, organic shape from Japanese architecture and Scandinavian design. Those of you who are into fashion, will definitely recognise similarities with clothes designed by Azzedine Alaia, who admired and collected Paulin’s furniture.

What makes a lamp designed in 1977 still look ageless in 2022? Perhaps the answer is its pure, geometric form designed by Vico Magistretti, one of the most influential Italian designers of the 20th century. He never chased after passing trends of the moment, preferring modernist simplicity to ornamentation. Today Atollo is still produced by Oluce, in opaline glass and metal, and continues to be one of the most iconic lamps.

If you could add more items to this list of timeless furniture pieces, what would they be? 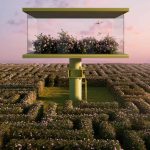